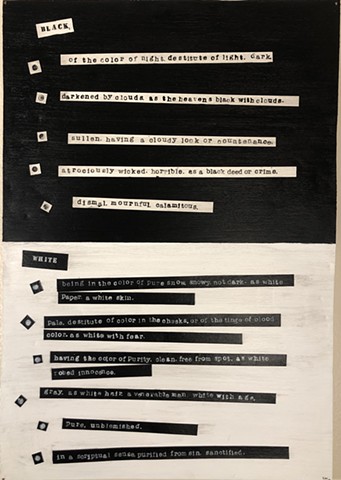 This painting expresses a conversation I read between two black men. One of the men was politically aware the other was not. In the context of a conversation about what it meant to be a black person in America, the politically aware man asked the other about who defined what black and white meant. They looked it up in the dictionary and it defined black in disparaging terms while white was defined in sanguine terms. They then looked to who wrote the dictionary, it was written by two old racist white men (Merriam and Webster). The politically unaware man, was now struck by a newfound empowering awareness.

That conversation has stuck with me ever since. It shows not only the power of words, in that they can work to define ourselves and our place in the world, but that this was a form of systematic racism. It is systematic in that an entire people speaking a common language may define and use terms in ways that oppress people without ever questioning why and how those terms gained their definition. These definitions only compromise one tiny facet of systemic racism.

This is also one of many examples of why the interpretive method known as “textualism" is flawed. This being that when a judge, potentially ignorantly, turns to a dictionary to seek a definition, they are accepting all the historical baggage that comes along with that definition. When a case, and therefore a persons life and fortune, hinges on the definition of a word, that definition and its history matters.

As you read the definitions pulled from an old Merriam Webster dictionary, attempt to feel how they impact you, your self worth, and your place in the world.

The text was stamped one letter at a time on cut paper. The aluminum sheet metal was attached to plywood with copper rivets.

The entire proceeds of this painting will go directly to organizations fighting for racial justice.